Once you get your Collector's Condition Comic Book Raw Grading Label Starter Kit, and put it through its' paces — Tell me what you think, and how we can improve it for the benefit of the collector's community.

WOW!!! This system is so much better than what I was looking for when I set out to find a sticker system to keep track of my raw graded books.

This system is new to me, just about 30 minutes in, but I can say this is the best system I have ever seen of it's kind. I was originally just looking for 1" round colored stickers with NM, FN, VG, etc printed on them to stick on the outside of my bags.  Your system blows that out of the water. I am so glad I found it and will be going through my entire collection grading and sticking :).  Thanks for your quick shipment and open communication during the process.  Be on the lookout for more orders from me in the near future. The first 300 I have will be depleted quickly.  Thanks again, and I love your raw grading system.  I am enclosing 2 pictures. Check it Out!

NostoNews, by Tommy Jasmin “mbruni has brought to market professional looking grading stickers for all the rest of us - the collectors and dealers who grade our own books! I can’t tell you how much I would have loved if some of my favorite dealers from the old days ... would have used a system like this at shows. You know, the guys who’s grading you trust implicitly. When you are browsing at a show and want to hone in on titles and grade ranges quick.” 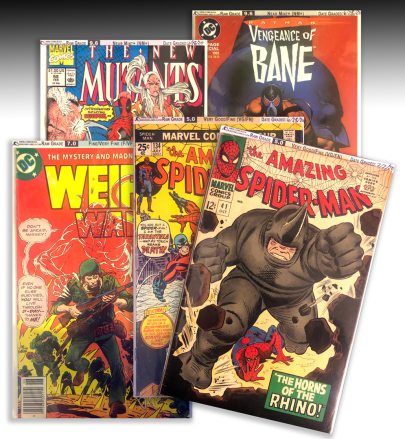 My name is Chris and I recently just bought your raw grade stickers! Sorry I haven't gotten back to you sooner, been very busy with work. They stickers are great, I personally really like them and in the future will be ordering more. Just a little tricky to stick them at first, but you easily get the hang of it. I've attached some of my comics that I've graded (although I don't know how accurately lol). If you have any questions or want more pictures just let me know. Hope all is well with you and your family. All the best & happy collecting,

• "Man, what a good idea...easy to use, easy to read, affo rdable, innovative...that's a hell of a lotta good marks to hit all at once! I'm going to show the guys I've been working with this one...we've all got mountains of comics lying around, after all!!! Good job, man." - Mike Waison, Madison, WI

• "Great idea to do the site - with some good promotion behind it could be big. "Your stickers are making my collection stand out!"
- Tom & Kaz Skulan, Dallas, Texas

• "Wild!  Love the idea of a SYSTEM, and if you can get to be the "industry standard", that's a nice residual. This is a fantastic idea, do you watch Shark Tank? Great Idea, great project, Mario... congratulations!" - Mark Lombardi, Port Jervis, NY 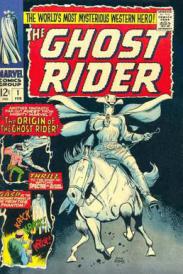 “We had had no school to go to,” says 87-year-old comic book artist Dick Ayers. “You went to a regular art school, and that’s what I told ’em in the art school. I got upset. ‘You guys are all the camera, the single Kodak camera. I’m the movie camera. I’m telling them a story.’”

One of at least 36 comic book artists scheduled to appear at Sunday Albany Comic Con at the Holiday Inn on Wolf Rd., Ayers may be less high profile some other artists like Joe Sinnott, Jim Starlin, Fred Hembeck and Jim Anderson, but he has been a personal inspiration to me since I was seven years old.

I remember the moment I saw my first painted cover edition of The Lone Ranger 60 year ago as if it were yesterday. It was on the middle shelf of Eaton’s Drug Store in Marblehead, Massachusetts, and it featured the masked man punching out the bad guy. The motion captured in that painting and the expression of determination on the masked man’s face completely captivated me.

I bought the issue, took it home and poured over every page. The idea of a masked avenger doling out justice appealed to my young mind more than fairy tales about pigs and princes, dwarfs and princesses with long tresses. But my masked avenger let me down. He was a wimp who shot the guns out of rustlers’ hands instead of putting them down. His response to heinous crime pulled the punch I first saw in that cover. To me he never lived up to his back story.

Ah, but the Ghost Rider was different. Not the chopper riding avenger from hell we know today but a spectral figure in white with a flowing cape on a snowy white stallion who drove evil doers insane by reversing his cape in the night, hiding in the darkness, throwing his voice and pushing the guilty parties over the edge in abject horror. Dick Ayers was the cartoonist who created stark images of terrified Ghost Rider victims in a way that mirrored the cell phone photos of Omar Kidafi’s last moments 60 years later.

From 1949 to ’54, Dick Ayers drew 167 Ghost Rider stories that appeared in 14 self-titled comic books and as backup stories in a number of other Magazine Enterprise comic books including Tim Holt, Red Mask, Bobby Benson’s B-Bar B Riders, and Best of the West. Ayers’ drawings took this young reader into a fantasy world in which good triumphed over evil, and like the more popular E.C. horror comics of the day were morality plays where the bad guys paid dearly for their mistakes, nudged over the edge by an avenger on a horse drawn so perfectly that I half expected to be able to climb on its back and fly.

Ayers says today his ability to draw horses came from growing up on a farm in Poultney near Lake Cayuga. “That stuff stuck in my mind because I loved playing cowboys and robbers, running through the vineyards and the gullies. It was great, so it came out in my drawing for Magazine Enterprises.”

From the radio melodrama The Shadow Ayers and writer Ray Krank took the idea of hiding in the shadows and throwing his voice to terrify wrongdoers. For two decades Orson Wells and other actors had played this then contemporary avenger who could “cloud men’s minds so they cannot see him.”

“We thought The Ghost Rider would bring in some sales ’cause the trend was going for these monsters and horror stories, so bring ’em on,” recalls Ayers. The most successful single issue was number 10 that featured a cover of the Frankenstein monster strangling a horror-stricken baddy in a swamp as the Ghost Rider rode towards the two. The story “Ghost Rider vs. Frankenstein” opened with this introduction: “People cowered behind barred doors for Frankenstein’s monster had come to America! Again and again, the night’s stillness was slashed by the anguished screams of the monster’s victims…then….they met and grappled on a craggy cliff in the battle of the century – Ghost Rider vs. Frankenstein!”

Things were riding high for Ayers until one fateful day in 1954 when three phone calls in a row put an end to The Ghost Rider and two other comics he was drawing. A psychiatrist named Fredric Wertham published a book that year entitled Seduction of the Innocent that sparked a U. S. Congressional inquiry into the whole comic book industry. Wertham was the Estes Kefauver of comic books. His blanket indictment of the industry forced a self-regulating Comic Code Authority on the whole comics business that in one swipe wiped out all horror and monster comics leading to the development of super heroes as the leading characters in comic books.

Ayers went on to become comic artist Jack Kirby’s inker on such super hero titles as The Fantastic Four, Ant-Man and early Incredible Hulk, but to this day the only super hero film he’s ever gone to see is the first Superman movie.

“They change so much,” complains Ayers. “They change the costumes. They do this, and they do that. I did see the first Superman because DC Comics gave us all tickets to see the show. There’s something about the costumes that don’t ring true. They look silly.”

Ayers doesn’t like most of today’s comic books either. “I jokingly say you need a roadmap to read them, to follow the lettering, the story. And it’s just too much. It’s beautiful to look at with all the backgrounds and everything, but the story loses. The thing about our story was you got to read it at a certain speed, and it was like seeing a movie.”

Comics in the 1950s were blamed for causing juvenile delinquency. He remembers one artist telling him that comic book art was the Gowanus of the business. “That’s where they dump the garbage in the Gowanis Canal.” Today, comic book superheroes are the breeding ground for some of the most successful movie franchises, and DC Comics just last month rebooted 52 titles, starting over with issue 1 on each, a jump start that sold out key issues five times over.

Comic book art still has a ways to go in the eyes of the art community, but for some of us events like Albany Comic Con are treasured journeys into another world. At age 56, Dick’s son Rich is just getting into the business with his dad.

“That little fella’d been growing up, and I thought they all hated my work and didn’t like comic books because in school they took them away from – all the stuff they had, they blamed us for juvenile delinquency. Here was my son telling me (how to use a certain brush). My God, He never asked. I never realized, never knew it. So now here for the last 20 year he’s been off and on working on this. And now he’s building himself a studio in his house.”

For your shopping convenience

FREE SHIPPING ON ALL USA ORDERS!

Do It Yourself Grading & Slabbing.

Grow From Being a Fan to a Collector into an Investor.

FREE with your first purchase of $29 or more. Details to follow. FREE SHIPPING ON ALL ORDERS! 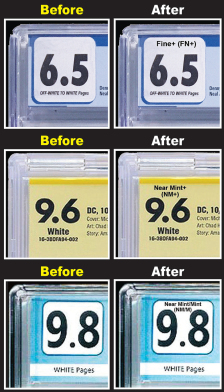 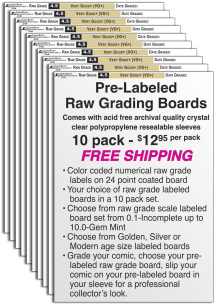 The raw grade labeling application method is for the rookie to the veteran comic book collector, investor, dealer and shop owners.

This product as seen on: www.nostomania.com

Choose from 4 new label kits that work accordingly with the following era:

Sign up at www.nostomania.com
Nostomania is an Internet community for collectibles enthusiasts.  Nostomania gives you the Internet's best collection management system.
Please Note: Prices are for a limited time only, and may change without notice.

Recommend this page on: